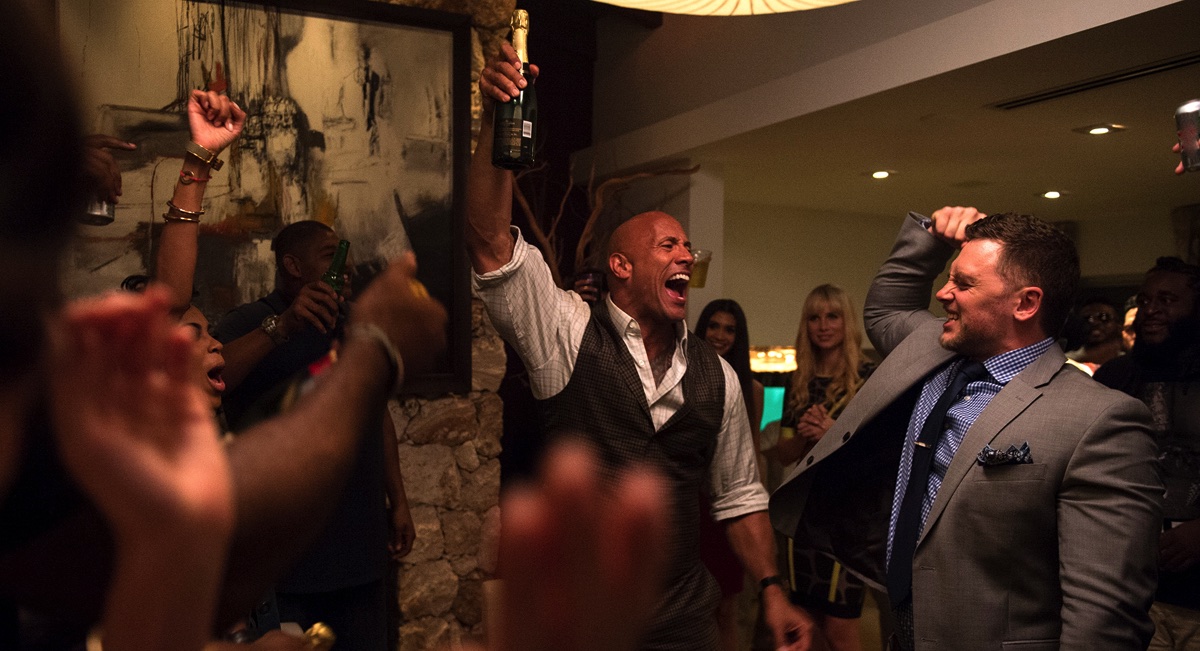 As the marijuana landscape in America changes, so does the way the plant is depicted in pop culture. Networks like HBO have put a concerted effort into breaking the mold of what “stoner” entertainment can be, with shows like the supremely fascinating High Maintenance serving as a prime example. The unique series employs a narrative in which weed intersects with all parts of life for the characters, but doesn’t slow them down or make them do cliche old Hollywood stoner things like immediately have the munchies or giggle uncontrollably while talking about how Dark Side of the Moon and “Wizard of Oz” lineup.

Another HBO series, the Entourage-meets-Hard Knocks comedy Ballers, took the opportunity in this week’s episode to depict an authentic representation of today’s cannabis industry as well.

Note: The article below contains spoilers.

In the episode, professional football star Vernon Littlefield’s friend and agent tour a grow facility and edibles factory to scout out a potential investment opportunity for the young multimillionaire.

The scene opens with Agent Joe Krutel and Vernon’s sidekick Reggie walking through the cultivation room of a grow house while their guide explains the operation. Joe questions the lofty capital gains Reggie envisions for the investment, admitting he’s skeptical the business will boom while it’s largely illegal. Reggie and the tour guide explain to Joe that the facility is growing primarily low-THC cannabis, specifically developed to fight pain and the symptoms of debilitating diseases such as epilepsy. When Joe scoffs at the notion that football players should be considering a more natural approach to therapeutic relief in favour of “legal” pharmaceuticals, Reggie reminds him that Percocets and Vicodin are the “addictive and over-prescribed pills that f**k up your head and turn your guts inside-out”.

The scene paints a very real picture for a lot of athletes facing the difficult choice between their long term health and a possible fine, suspension, or worse. This is the kind of crucial dialogue that needs to be had in pop culture for the uninformed viewer to change their perception of what cannabis really is.

We had the opportunity to discuss the real cannabis industry as well as the Hollywood rendition with two high-ranking officials from Terraform Genetics, the grow facility where Ballers filmed this week’s episode. Terraform grows cannabis for WHTC in Studio City, California, where the scenes for Ballers were shot. CEO Brett Kane and head of marketing Alex Leon were ecstatic to work with HBO and the show’s production team to make the episode seem true-to-life in today’s marijuana market, so we were just as excited to hear how it all went down.

Marijuana.com: How did this collaboration with Ballers come to fruition?

Brett Kane: They did about three inspections trying to see if they wanted to shoot in the collective or the grow. Ultimately, they ended up shooting in one of our grow rooms and then turning our trim room into a full-blown edible kitchen with their own ovens and everything. I came back from a lunch and was shocked it only took them 2 or 3 hours to totally rearrange our trim room. It’s interesting, because we’re very selective of who we let into our operation — and all of a sudden, we have this crew of 50 people walking around. There was a lot of anxiety but they were great, everything went really well.

MJ: What were some of the reactions from cast and crew who hadn’t seen a grow before?

Brett: They were all taking photos and selfies with nuggs, all taking turns smelling different strains. They were like kids in a candy shop, it was that kind of reaction.

Alex Leon: The funny thing about it is, people who don’t understand the industry and the legalities of it have a stereotype that marijuana is just growing all over Los Angeles in warehouses — and it may be in some places — but the one thing I remind people wanting to shoot in these environments is that while it makes for a great story, a lot of these places aren’t going to let in 50-100 random people they don’t know just to produce a couple of scenes.

Brett: We run a very clean environment and we’re very careful about things getting tracked in — it’s basically a hospital inside. They really worked with us to make sure everything was alright. You could tell it was something they were dealing with for the first time, it was cool.

MJ: What did you guys have to change logistically to keep everything hospital-like with all the extra bystanders?

Brett: We tried to keep certain areas restricted to just the actors and film crew, keeping the traffic to a minimum. We gave them free reign in the trim room.

MJ: How do you think actual grows being shown in this light can change the public perception?

Brett: It’s a real grey area right now because some states are legal and some states aren’t. I think the more that people see it and get accustomed to it, the more they’ll realise it is medicine. Cannabis is something that really does help people and the public is becoming aware of that. It’s been baby steps, but already you can see the country responding to it in a very positive way. And the more they see it on TV and the more they hear about it on the radio or wherever they go, that’s the transition we’ve all been waiting for.

MJ: How did HBO’s shooting schedule work with your normal business operations?

Brett: We had to let them know that we are growing medicine here and we have to maintain protocol. Once a grow room is harvested, you have to get those plants out and get the new room in — it has to be timed just right. They obviously wanted to see the room when it was in full flower, but schedules change and there were times where they’d ask to bump a shoot two weeks, but we had to let them know that plants needed to be harvested on a certain date so we couldn’t really do that. This is a constantly operating facility, essentially a conveyor belt. Once we worked through all of that stuff, it was great. They were very respectful to us and our facility.
MJ: Are they any other shows you’d love to work with?

Brett: Game of Thrones would be awesome!

While Game of Thrones does have a penchant for allowing cameo appearances, I’m guessing a top notch cannabis grow facility won’t find its way into the storyline anytime in the next few centuries. Thankfully, in the here and now, we have networks and writers willing to take the extra time and care to cultivate a story that portrays what real weed culture is all about — progress.

Also, stick around later in the episode to see Rob Corddry crush his hotbox karaoke performance of an all-time classic smoking song, Styles P’s “Good Times”. Youtube didn’t have the version SP the Ghost intended for us to hear, so we’ll have to get  by with the clean version.