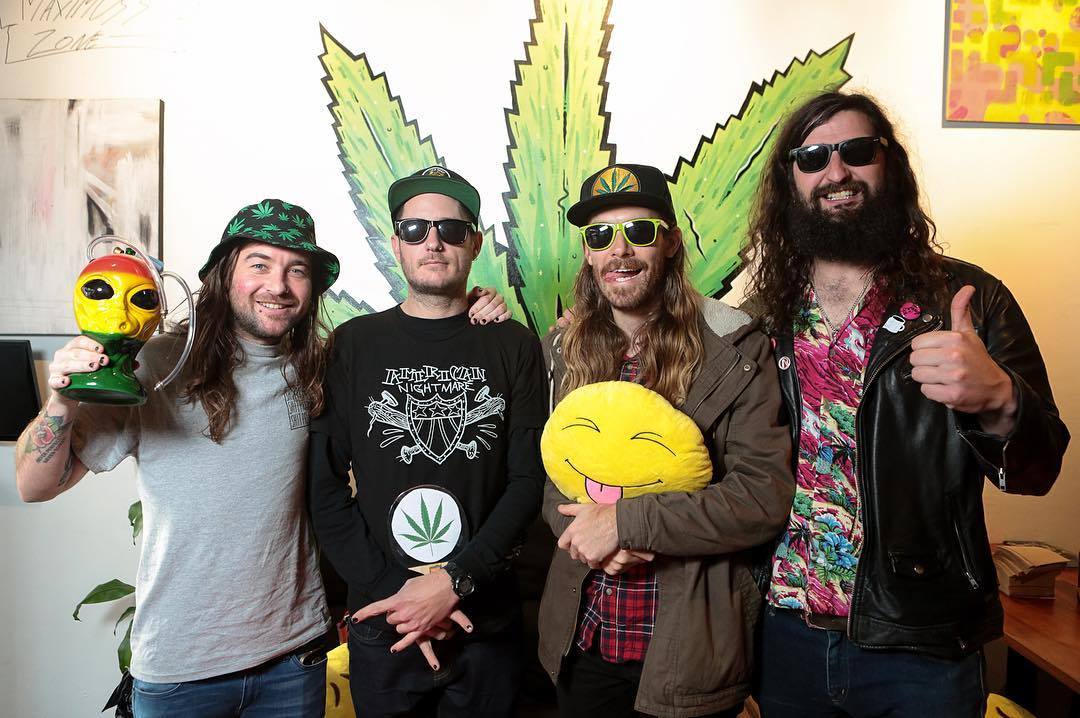 After stopping by Newtown stoner food cafe D’Munchies, The Bennies hit up the Factory Theatre for a killer gig

After stopping by Newtown stoner food cafe D’Munchies for a feed and an interview with Moshcam last Saturday July 7, Melburnians The Bennies hit up Marrickville’s Factory Theatre as part of phase two of their Wisdom Machine tour. Writer Arms gives us his lowdown:

The Factory isn’t my favourite venue (the carpeted floors makes me feel like I’m in a bowling club), but last night the vibes were killer as punks, stoners and party fiends came out to watch The Bennies raise the roof. The crowd was an eclectic mixture of young and old, with the odd mohawk to be spotted and several dudes sporting hefty heads of dreads.

Second support act Axe Girl played a mesmerising set. Frontwoman Addison Axe pranced out in leopard skin tights and a plain white tee, hair teased in all directions, electric blue eyeshadow and the confidence of a natural performer. She moved around the stage like a cat, belting out tracks with passion and zeal all the while flaunting her confident sexuality. It was like an 80s glam queen had been teleported to the 21st century with a quick stopover at Kurt Cobain’s place.

Clowns hit the stage next and rose the energy levels in the room with some heavier tracks. Overall they were pretty tight, except for a few mishaps with the lead guitar in their closing song that kind of killed it for me.

Regardless, they got the crowd ready for The Bennies, and the Melbourne psychedelic-ska-punk-doom rockers came onto the stage to a wild reception. All they had to say were the words “party” and “weed” and a roar of approval echoed through the theatre.

They kicked off with ‘Detroit Rock Ciggies’, which caused a moshpit to form that raged on all night. As the set progressed they moved into some of their slower ska tracks, which had the crowd swaying from side to side and singing along beneath a haze of marijuana smoke (less than I expected, though!). Fittingly, they closed with ‘Knights Forever’, a celebratory Aussie punk ballad about nights out with friends, before coming out for two more songs.

Lead vocalist Anty Horgan maintained a steady interaction with the crowd throughout, with calls for roof raising happily met by the audience. The nature of the songs, with their simple catchy lyrics about getting fucked up, really lent themselves to call and response. When they spoke to the crowd it seemed genuine and the response they got back was passionate.

From seeing these guys on stage (and having a chat with Jules Rozenbergs, vids above) you can tell that they are total dudes. There’s no hidden persona or conceit – they’re just straight up dudes who like to smoke weed and party. Luckily, so too does their crowd.