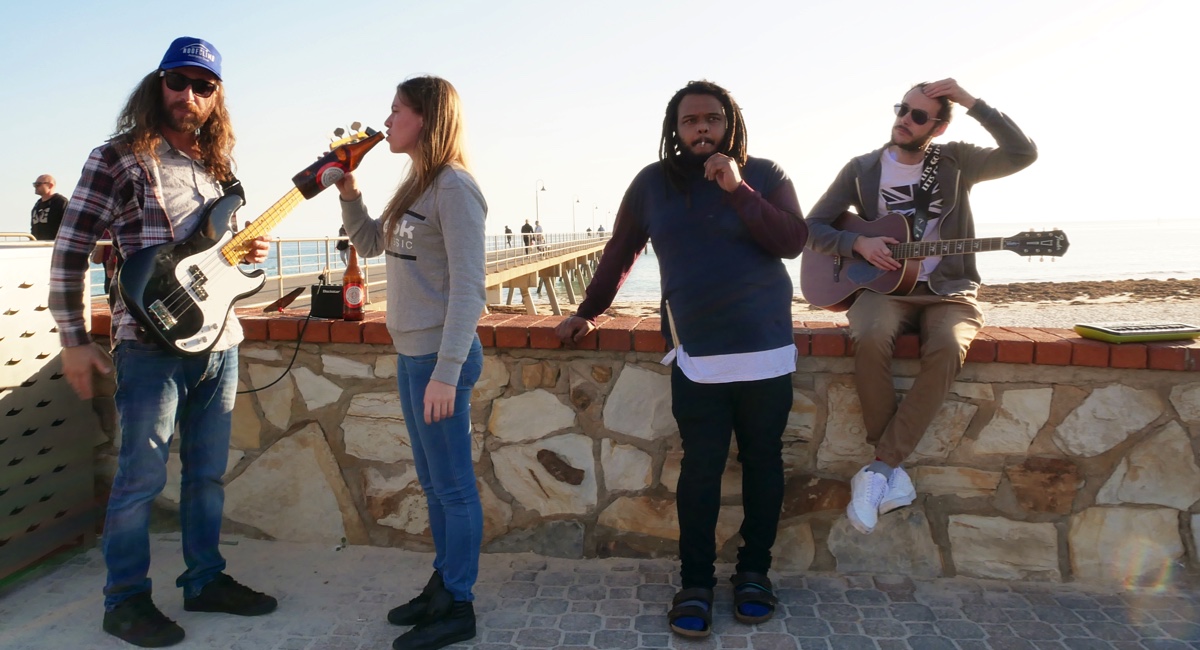 They spoke with Dopamine after a pre-show joint

Adelaide hip hop outfit The Real Mac Dimarco have a killer sound (that’s not particularly similar to the real Mac Demarco), which features a twist of funk, grunge, folk and everything in between. They spoke with Dopamine after a pre-show joint before their gig at Adelaide’s Crown and Anchor earlier this month.

The Real Mac Dimarco dropped their debut EP Head In the Clouds earlier this month, check it out below!

What’s the story behind the name?

Mark: Well, it started as a bit of a dumb stoned thing between me and Benny. My name’s Mark D’Amico….

Ben: And I thought his name was Mac Demarco.

Adrian: And he was playing with Benny’s old band and that’s how he introduced him.

Benny: I really thought his name was Mac Demarco, ey.

Mark: So that pretty much stuck. I was trying to tell everyone that’s not my name but he started introducing me to all his mates as Mac Demarco and it got to the point where I was meeting people and they were like ‘hey, Mac!’ so I was like, well, I guess that’s me.

Ben: No one wants to hear all that!

Adrian: This ain’t no audiobook.

Mark: I’m gonna get that shit narrated by Morgan Freeman… Anyways, that’s how that shit went down.

(Ben sees a mate at the bar and forgets we are recording an interview.)

Is Mac Demarco an ideal person your act would like to support some day?

Adrian: Definitely, he’s pretty chill. He hits the spliff so…

Mark: I don’t think he’d really care much about our name. He’d think it’s funny so we would definitely like to play with him.

Adrian: And even if we didn’t play with him we’d smoke with him anyway.

Plenty of weed would be smoked at that show do you think?

Mark: A fuckin’ lot of weed would be smoked at that show… mostly by us and Mac.

Bec: Do you mean the real Mac Demarco?

Bec: Yeah, he potted the black ball, so that means he won.

Mark: And then he just fucked off.

Adrian: I think he did it on purpose.

Your debut EP ‘Head In The Clouds’ was released this month. Will this be followed up by a tour?

Mark: I think we will just play as many shows as we can around Adelaide before we hit a tour, but you never know what’s gonna happen.

Adrian: A local tour definitely, but we are looking to…you know…

What’s the song ‘Papa Luigi’ about?

Mark: Not quite sure what it means.

Adrian: It just started with that line ‘that motherfucker popped a Papa Luigi’. Then the boys wrote verses.

Mark: I was baked and thought those words sounded good as a flow and Ben just decided to write about Mario Kart cuz he heard Luigi.

Mark: My dad is Papa Luigi.