Amyl nitrite is the most well known of a group of chemicals called alkyl nitrites, usually referred to as poppers. Product names include rush, TNT, thrust, jungle juice, ram and kix.

Poppers are an inhalant. The most common method of use is to hold an open bottle to your nose and breathe in hard.

Inhaling nitrites relaxes muscles in the body. Blood vessels dilate, blood pressure drops and heart rate and blood flow increase. This physical effect causes body temperature to increase, dizziness, skin sensitivity and a feeling of excitement – a “rush” – that lasts for one or two minutes. Some people will get headaches and nose bleeds after use.

Poppers are a yellowish or clear liquid with a very low vapour point. This means it evaporates into the air almost immediately at room temperature if poured out of the bottle. The chemical is light-sensitive, so the bottles are usually dark brown or covered to protect the contents.

Amyl nitrite should not be confused with amyl nitrate. Amyl nitrate is used as an additive in diesel fuel to accelerate the ignition of the fuel.

Amyl nitrite has been used for decades. Pharmaceutical-grade amyl was manufactured by Burroughs Wellcome and sold in small glass capsules, which were crushed to release the vapour. The name “poppers” came from the popping sound made by crushing the capsule. 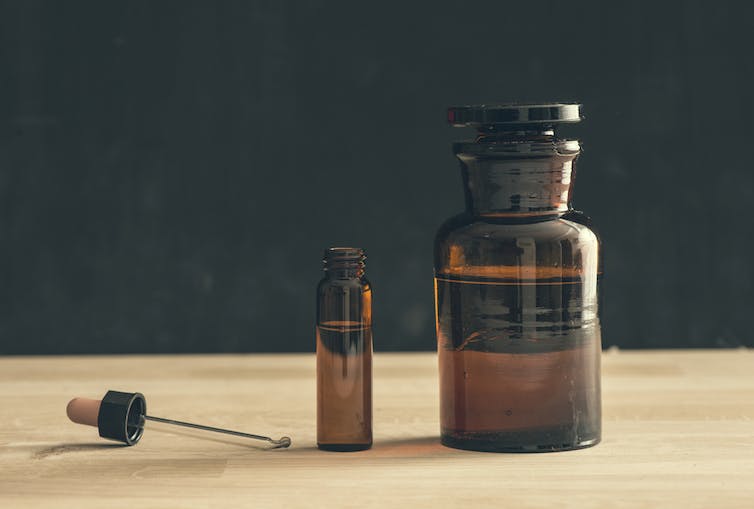 In the 1991 film The Doors, Jim Morrison, played by Val Kilmer, sniffs amyl nitrite from a glass capsule in an elevator immediately before receiving oral sex.

Amyl nitrite was used to combat the effects of cyanide poisoning in the 1930s. In the US, cyanide poisoning kits still contain amyl nitrite, which changes some of the iron in the blood to a molecule that cyanide can bind to and then be excreted from the body.

Amyl nitrite was used for the treatment of angina in the 1960s. More effective treatments for angina are now available.

Poppers are mostly used at clubs and parties to enhance the experience. The National Drug Strategy Household Survey found 0.8% of the population, or 184,000 people, in Australia had used an inhalant in 2013. However, this will include inhalants such as petrol, paint thinners and aerosols.

Use of poppers is more common among the LGBTIQ community and people who use other party drugs. An annual study of illicit drug use in Australia found 21% of regular ecstasy users also used amyl nitrite occasionally in 2015. This was an increase from 17% of study participants in 2014.

Side effects and interactions

Even though poppers are taken to enhance experiences, they are a depressant drug like alcohol, because they slow down the central nervous system and reduce alertness. Poppers are not addictive and not poisonous if inhaled, but can cause coma or death if swallowed.

Using poppers causes some health problems. The liquid can burn the skin on contact and they are extremely flammable. Frequent use can cause irritation of the nose and throat and chemical burns, including a rash around the nose and mouth.

People taking Viagra should not use poppers because both drugs make blood pressure change unpredictably.

Laws controlling the sale and use of poppers vary around the world.

Isobutyl nitrite was banned in the European Union in 2007 because it was strongly linked to cancer and reproductive problems.

Since it was banned, six frequent popper users in the UK have lost their eyesight as a result of using a related product, isopropyl nitrite. Similar problems have been reported in Australia.

In Australia it is illegal to sell, supply or inhale products containing amyl, iso- amyl, alkyl, butyl and octyl nitrites unless prescribed by a doctor.

However, poppers can be bought online or in sex shops in small bottles labelled as room deodoriser, polish remover or video head cleaner.