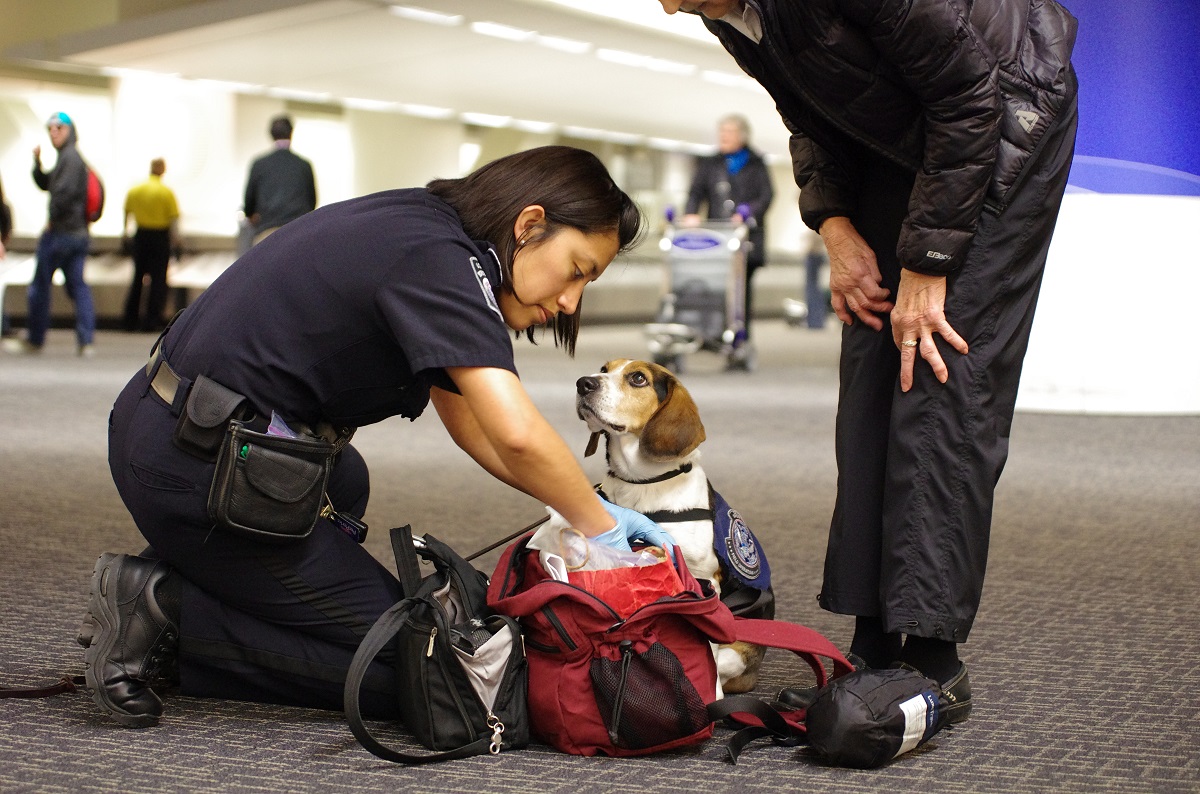 I must admit I wasn’t looking my most presentable as I stumbled into Los Angeles International Airport. My year in Mexico was over so I was a little glassy eyed after having shed a tear or two for my temporary home as I flew away.

Looking like a stoner, clad in my poncho and hiking boots, I can’t blame the lady at US Customs for pulling me aside for a random bag check. What came next, I suppose I can blame her (and the system) for partly, though I do blame myself for it too.

“She smiled and looked at my four bags and said, ‘This is going to take a while.'”

Basically, I now know what it’s like to be slapped with a fine for possession of a controlled substance when entering the USA. And let me tell you, the experience was every bit as traumatic as you’d expect it to be. Here’s my little story, written in words for the first time.

I could tell this customs lady probably liked her job when she smiled and looked at my four bags and said, “This is going to take a while.” I was being smiley and compliant, I had four hours until my connecting flight to Sydney took off. Obviously it was an inconvenience, but I was feeling OK at that stage. 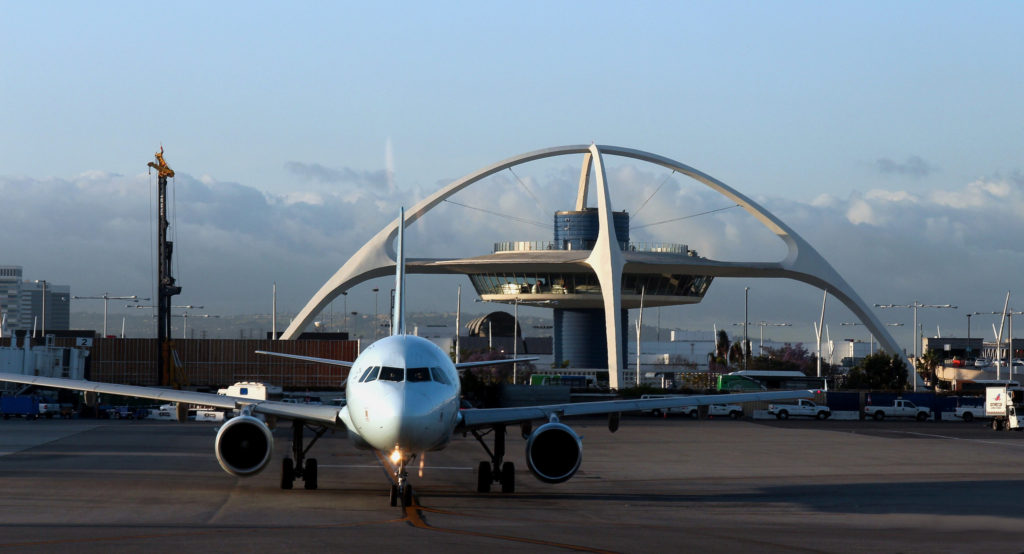 After totally stuffing up my meticulous and careful packing, the lady came across a paper bag, stuffed with 4 brand new pipes, gifts for my friends back in Sydney.

“And what would these be?” she asked me, knowing clearly what they were.

“And what are these used for?” Again, she knew. It was at that point I knew she loved her job and I didn’t like her for that.

“What I wasn’t expecting was to be thrown into an armoured police vehicle in the hold at the back. That was kind of fun I guess, albeit short lived.”

“Smoking marijuana,” I replied. I didn’t want to go spinning lies. That’s the dumbest idea when facing up to US Customs. Although I could have lied about the next question.

“Now, you wouldn’t happen to have any used ones, would you?”

I did have a used one. I remember packing it ages ago, and I felt like a dumb ass for not leaving it out of my bag. That said, it only had a little bit of burnt out green on the bottom. Surely that’d be nothing, right? It was a nicely carved wooden one I had bought on a beautiful tropical beach and smoked with a beer in hand, watching the sunset.

“Oh, yeah, there’s probably one in there, yes” I said, sheepishly. Fuck.

And so the mission to find it began. Just as she was threatening to bring the dogs over, I finally found it stuffed away in a pocket of one of my carry on bags. Double fuck.

Now I wouldn’t say I’m stupid. I’m definitely not stupid enough to try to smuggle weed through the US. But I really didn’t think I would run into any problems with this little pipe with a bit of burnt-out shit on the bottom.

“I was instructed to take my shoelaces off. After nodding off for a bit I was woken up and interviewed.”

But apparently it was a big problem.

After scraping out a minuscule amount out of it into some kind of testing kit (as if there was any doubt that it was pot she was scraping out), I was told I wasn’t being arrested – phew – but as soon as the relief sank in I was whisked away to be aggressively patted down and searched by some thuggish looking man.

He turned out to not be that thuggish, especially once he realised that I was just a student and was hardly going to be able to afford the US$500 fine for “possession of a controlled substance”. He showed a bit of sympathy, but didn’t offer to turn a blind eye or anything. Neither did the Customs lady.

“Well, that’s the most expensive weed you’ll ever buy,” she said as I punched in my pin to the Eftpos machine, watching $750 Aussie dollars heading down the drain.

“Charcoal,” I corrected her, “There wasn’t even enough to smoke in there.” 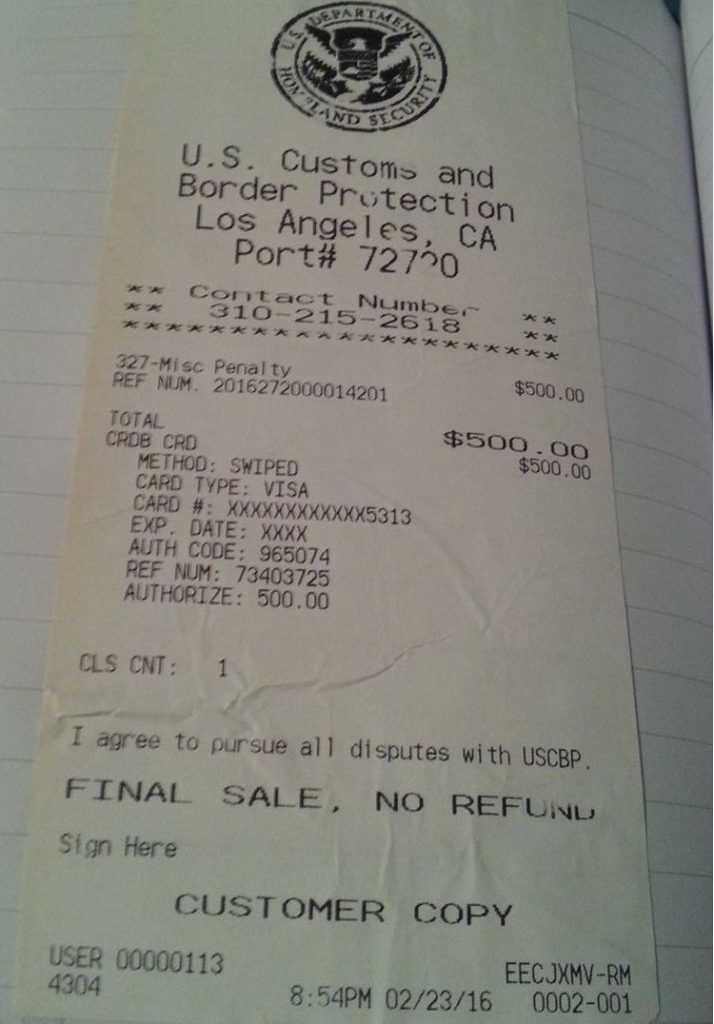 The receipt for the fine

I was then transferred to a waiting room. The process of fining me had taken about 2 hours, and I was already royally pissed off. But I kept on complying, which was probably my smartest move.

I was greeted by a lumbering Customs cop, who looked like he was both on an insane power trip and extremely stressed out by the impressive volume of illegal-looking Mexicans trying to get into the States. I was shoved to the back of the waiting room.

No-one told me how long I would be there – but it became apparent after about half an hour that I was going to miss my connecting flight. The crazy thing about all this was that I didn’t even want to go into the US – I was literally just passing through on my way back home from Mexico.

After everyone else was cleared out, it was finally my turn. I was greeted by the staff packing up for the night, and told I would be moved to another terminal, escorted by two more cops. One was about six-foot-five and softly spoken, the other was significantly shorter but significantly more a battle-hardened. What I wasn’t expecting was to be thrown into an armoured police vehicle in the hold at the back. That was kind of fun I guess, albeit short lived.

“Two other unlucky Aussies came in… The former was deported, and the second banned for five years.”

Arriving at the new terminal, I was escorted into the building.

“We hope you have a great LAXperience” rang a voice over the loudspeaker. Well, I was definitely having one of those. By this time it was about 1:45am. My flight was long gone.

The police were nice and let me call my parents when we reached their offices at the back. I told them I’d been done for having a bit of weed residue in my bag. They were cool with it, and glad to know I was alive. After that I was to be interviewed by one of the officers, and in the meantime was ushered into a dank little waiting room with a few chairs, a few occupied canvas beds, and a TV and DVD player with some movies.

I was instructed to take my shoelaces off. After nodding off for a bit I was woken up and interviewed. They told me I wouldn’t be eligible to enter the US through the visa waiver program, ESTA, for the rest of my life. From now on I’ll have to go to the embassy if I want to enter the country again.

They told me I would be on the next available flight on my airline – which, of course, wasn’t going to be until 10pm the next day. So I was told to hang tight in that shitty waiting room.

After a sleep (the officers let me have my sleeping bag and hiking mat), the next day was spent watching movie after movie after movie in the same clothes I had been wearing the whole time. The officers offered me water, noodles, and went and bought me a burger with some money I had.

Two other unlucky Aussies came in – one who had an American husband whose records had been lost, and another who had gotten the wrong visa as a professional golfer and was going to be earning money illegally. The former was deported, and the second banned for five years. We all got off badly but in different ways – but we all had a good laugh about it in the waiting room, which really made me look forward to home.

When the time finally came, two smug officers escorted me right to the door of the plane. I had stuffed my shoelaces in my bag (which had been taken) so I had to stomp around like a smelly, shoelace-less hobo. I was even patted down and searched again, as if I had somehow been able to acquire anything illegal during my time in the care of Customs.

One of the cops decided to lecture me on drinking alcohol being a better option than smoking weed. I wanted to tell him to fuck off. But instead I shut up and got on the plane. They didn’t even let me hold my passport. My name rang through the loudspeakers as the other passengers were taking their seats saying I could come and collect it at the end of the flight.

Luckily for me, nobody knew my name – I was a mere statistic, another cog in the US revenue machine, a poor student drained of nearly a thousand bucks just for a bit of ash. I had the best sleep of my life on that flight, and stumbled out at Sydney Airport, greeted by a beautiful summer’s day.