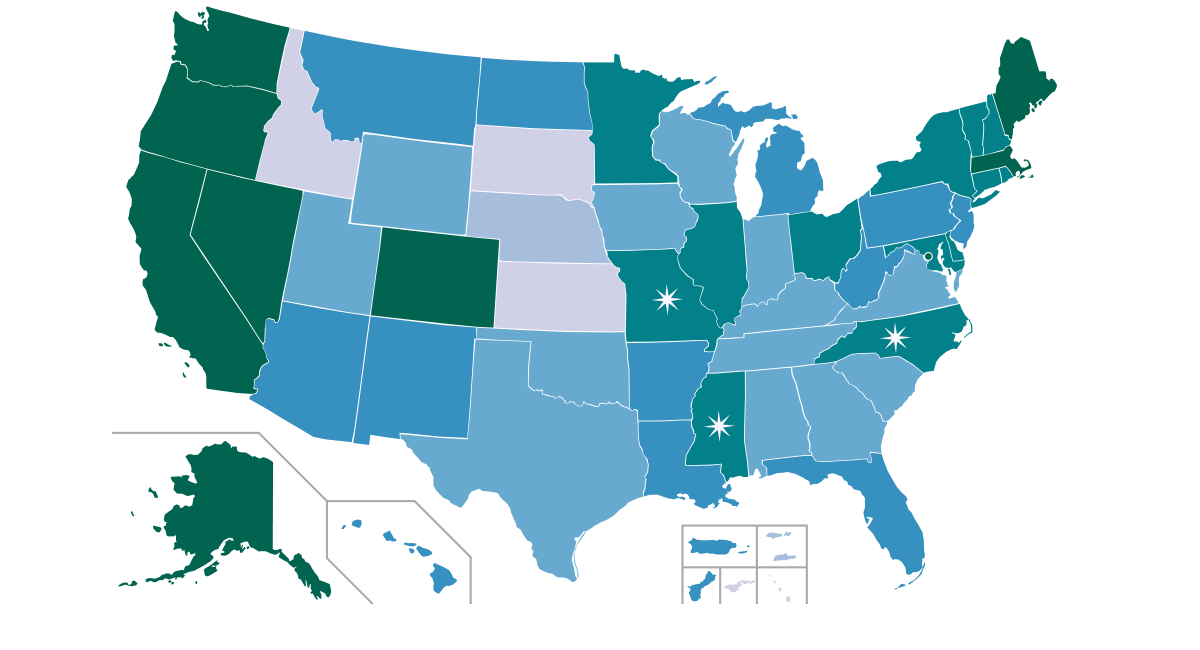 The US has an interesting relationship with cannabis

By Lesley Nickus for marijuana.com

The United States has an interesting relationship with cannabis. Its citizens have repeatedly expressed a desire for more research and access to the plant. On the federal level, those outcries have fallen largely on the tone-deaf ears of national policymakers. State legislators have been taking action to meet the demands of their constituents.

Since California voters successfully petitioned for legal access to medical marijuana in 1996, 28 additional states have implemented policies to allow access to cannabis for medical patients — eight of which, plus the District of Columbia, have legalised the recreational use of the herb.

Until the federal government follows suit, cannabis will remain federally illegal in the US — but that doesn’t mean you can’t still legally get your hands on it. Confused? Don’t worry, we’ve got you covered. Here is our overview of cannabis legality in the US of A. 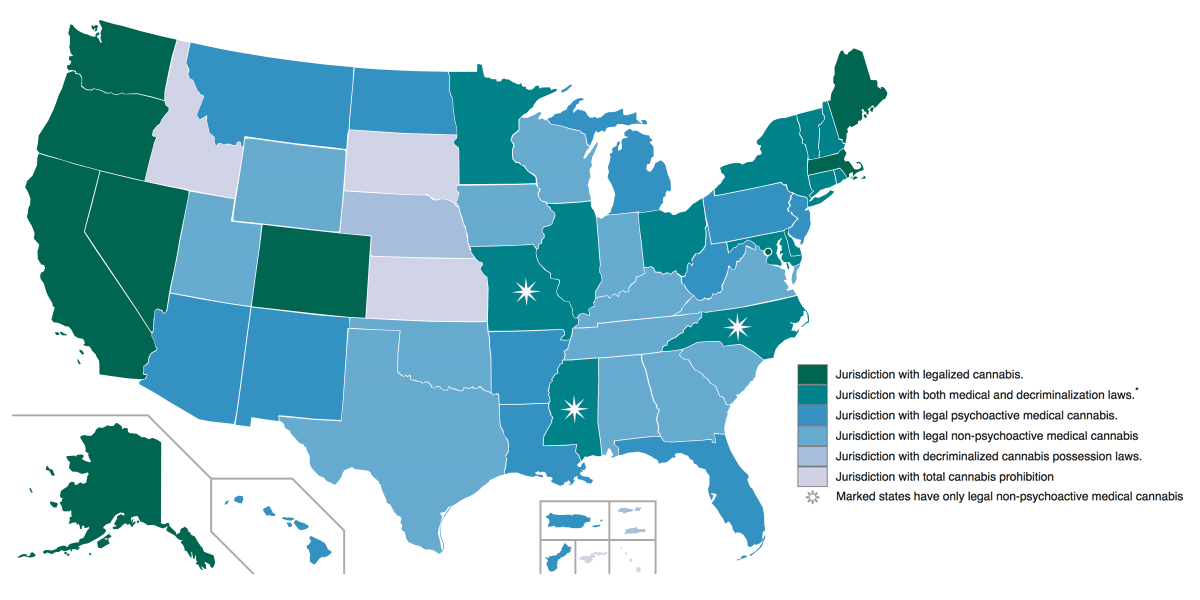 Colorado was the first state to fully embrace recreational marijuana use with the passage of Amendment 64 on Nov. 6, 2012. Residents and visitors alike can possess up to 1 ounce without penalty and can visit any of the state’s recreational dispensaries with valid proof of age. As with alcohol, recreational users must be 21 and over. Colorado officials decriminalised cannabis in 1975 and the state’s medical marijuana program launched with the 2000 passage of Amendment 20 by 56%. The state has collected more than US$500 million in fees and taxes since recreational retail sales launched in 2014.

In the Pacific Northwest, Washington led the charge for recreational cannabis consumption in the region with the 2012 passage of Washington Initiative 502 — 14 years after Initiative 692 passed by 59%, allowing for medical cannabis consumption. Anyone over the age of 21 can legally carry an ounce of cannabis in the state and visit a dispensary to purchase cannabis products, though Washington is one of a few states that does not permit personal cultivation. In 2016, Washington’s cannabis tax revenue was $256 million.

Nearly 16 years after the state’s medical marijuana program had been underway, Oregon voters passed Measure 91 on Nov. 4, 2014, which regulated the recreational possession and sale of marijuana for adults in the state. Between 2014 and 2015, Gov. Kate Brown signed numerous reforms to refine the state’s recreational cannabis industry. Last year, the state received $60 million in taxes related to the production, sale, and consumption of cannabis.

And while the leaders on Capitol Hill hem and haw over federal cannabis laws, in 2014, voters in the District of Columbia passed Ballot Initiative 71, which legalised the personal recreational use and possession of up to 2 ounces of cannabis or personal cultivation of up to six plants; the legislation was enacted in 2015. Commercial cultivation and sales are still prohibited.

On Nov. 4, 2014, Alaska voters passed Measure 2, allowing recreational cannabis consumption in the state. Individuals may possess up to 1 ounce of cannabis and grow up to six plants for personal use, or 12 plants in a household with two adults over the age of 21. Alaska’s medical program was established in 1998 by Ballot Measure 8, which passed with 58% of the vote. In August, the state reported nearly $700,000 in tax receipts on the sale of 734 pounds of flower that month.

California voters passed Proposition 64 on Nov. 8, 2016, paving the way for a full-fledged recreational cannabis program set to launch in 2018. In 1975, then-Governor Jerry Brown’s enactment of Senate Bill 95 made possession of 1 ounce or less a misdemeanour and paved the way for the 1996 passage of Prop 215 by California voters to legalise the medical use of marijuana. Californians may legally possess up to 1 ounce or grow up to six plants without penalty. In 2018, visitors to the state will have access to cannabis with a state-issued ID proving they’re over the age of 21.

Also in 2016, Massachusetts voters passed Question 4 by 54% to allow recreational cannabis consumption, four years after 60% of voters supported Question 3, which established the state’s medical marijuana program. Massachusetts residents can possess up to 1 ounce outside of their home and grow up to six plants.

In Maine, voters legalised recreational cannabis in 2016, but a bill outlining the regulations must be signed by Gov. Paul LePage before it can take effect. Questions remain as to whether he will veto the bill in the coming weeks. If signed, folks in Maine will be able to carry up to 2.5 ounces and grow up to six plants for personal use. Maine’s medical marijuana program, which was approved by voters in 1999, continues, and a 2009 decriminalisation effort that reduced possession of up to 1.25 ounces to an infraction that incurs a fine of $600 or less remains in place.

Nevada made waves when its legal market hit the scene in July of 2017 — a mere six months after voters approved Question 2 by a 54% on Nov. 8, 2016. In the first weekend of sales, the state netted more than half a million in tax revenue and high demand sent prices skyrocketing. Residents and visitors are allowed to possess up to 1 ounce of flower or an eighth ounce of concentrates and can visit any recreational dispensary in the state with a valid, 21+ ID. Nevada’s medical marijuana program has been operational since 2000.

Which States Have Medical Marijuana Programs?

Arkansas set an aggressive timeline for the implementation of their medical marijuana program, which voters approved via Issue 6 in 2016. The newly-formed Arkansas Medical Marijuana Commission established regulatory guidelines over the course of six months and began accepting Arkansas marijuana dispensary and cultivation applications in June 2017. The commission is currently reviewing those applications. Patients will be allowed to possess up to 3 ounces, with no home cultivation.

Also still in development are regulations for Florida’s medical marijuana program, which voters approved by 71.3% in 2016. Louisiana, whose house and senate voted to pass medical marijuana legislation in 2015, has faced a barrage of amendments and challenges that have prevented their program from officially launching. Only Louisiana State University(LSU) and Southern University agricultural centres may grow the state’s medical cannabis crops, and LSU officials anticipate they’ll be ready to start growing in 2018.

Pennsylvania and West Virginia enacted medical legislation in 2016 and 2017, respectively, and allow for the possession of up to a “30-day” supply, though exact quantities have yet to be set. Ohio, meanwhile, will allow medical patients up to a 90-day supply with quantities determined by the type of product. Maryland and Minnesota bills enacted in 2014 also allow medical patients to possess a “30-day supply” of cannabis. In Maryland, a 30-day supply is considered “no more than 120 grams” of dried plant material and in Minnesota, medication can only be consumed in pill, liquid, or oil form. New York, which enacted legislation allowing a “30-day supply” of cannabis in 2016, strictly bans smoking and edibles, allowing only vaporisation, capsules, inhalers, and other liquid applications.

Some of the earlier adopters of medical cannabis laws include Hawaii, which adopted Senate Bill 892 in 2000 to allow possession of up to 4 ounces and seven plants; Montana, which allows up to 1 ounce of dried flower and four mature flowering plants per the 2004 passage of Initiative 148; and Vermont, where up to 2 ounces or nine plants were authorised for medical patients with the passage of Senate Bill 76 that same year.

In 2011, medical legislation allowing up to 6 ounces was enacted in Delaware. The Connecticut Senate and House passed legislation in 2012, which allowed for medical possession of up to 2.5 ounces of cannabis for qualified patients.

Decriminalisation and CBD Acceptance in the United States

In 1978, possession of up to 30 grams on a first offence was decriminalised in Mississippi and the state officially joined the CBD-friendly community in 2014. The University of Mississippi houses the only federal cannabis crop in the country, from which a small contingent of approved researchers sources their material. South Carolina has a law that allows access to CBD oil for children with severe epilepsy under the care of a doctor. That legislation was signed by then-Gov. Nikki Haley in 2014, the same year Kentucky, Iowa, and Missouri added CBD to their list of permissible substances.

Georgia voted to legalise high-CBD cannabis for medical use in 2015 if the cannabis contains less than 5% THC. Qualifying conditions include cancer, sickle cell anemia, and other diseases associated with severe pain — patients can have up to 20 ounces of cannabis oil. For everyone else, marijuana possession, sale, or consumption convictions will result in the loss of a driver’s license, among other penalties. Atlanta’s City Council voted in early October to decriminalise the possession of 1 ounce or less of cannabis.

In Wisconsin, Alabama, and Indiana, first offences are considered a misdemeanour with the exception of CBD oil in very specific cases. North Carolina decriminalised cannabis in 1977 and legalised CBD in 2015. Oklahoma’s Governor Mary Fallin signed legislation approving cannabis oil for youth with epilepsy in 2015 as well. In Texas, CBD oil is allowed in very limited applications for patients with severe epilepsy, however, the verbiage of the bill has been brought into question, since doctors must “prescribe” rather than “recommend” CBD

In Tennessee, possession of a half-ounce or more is considered “possession for resale” and considered a felony. First-time offenders with less than a half-ounce can qualify for supervised probation rather than incarceration. Interestingly, cultivation of nine plants or less is a misdemeanour and as of 2015, CBD oil is OK for those suffering with seizures or seizure disorders.

Utah has somewhat decriminalised cannabis. Anyone in possession of less than 1 ounce faces six months in jail and a fine up to $1,000 on the first offence. In Virginia, HB 1445 allows CBD oil as a treatment for epilepsy and seizures so long as the oil contains at least 15% CBD and no more than 5% THC.

Not all states that have decriminalised cannabis have CBD-friendly laws. In these states, producers and retailers face the question of whether or not CBD is federally legal, since hemp is protected under the 2014 Farm Bill.

To further complicate the matter, the Drug Enforcement Administration (DEA) in December issued a rule that all cannabis-derived products — and isolated parts of the plant — are illegal under federal law, prompting questions from members of the hemp industry, who have been legally selling hemp-extracted products for years. The DEA pointed to Section 7606 of the 2014 Farm Bill, which specifies higher education institutions and state departments are the only entities that can legally grow and cultivate, but not produce products.

In Nebraska, possession of up to 1 ounce is considered an infraction on the first offence and could net up to a $300 fine. The state’s attorney general said publicly this year that the sale of CBD in Nebraska is also against the law.

The conversations surrounding the legality of cannabis are continually evolving. If you’d like greater access to cannabis in your state, reach out to your local legislator and share your opinions. You can find your representatives by entering your address in this helpful tool from Open States.