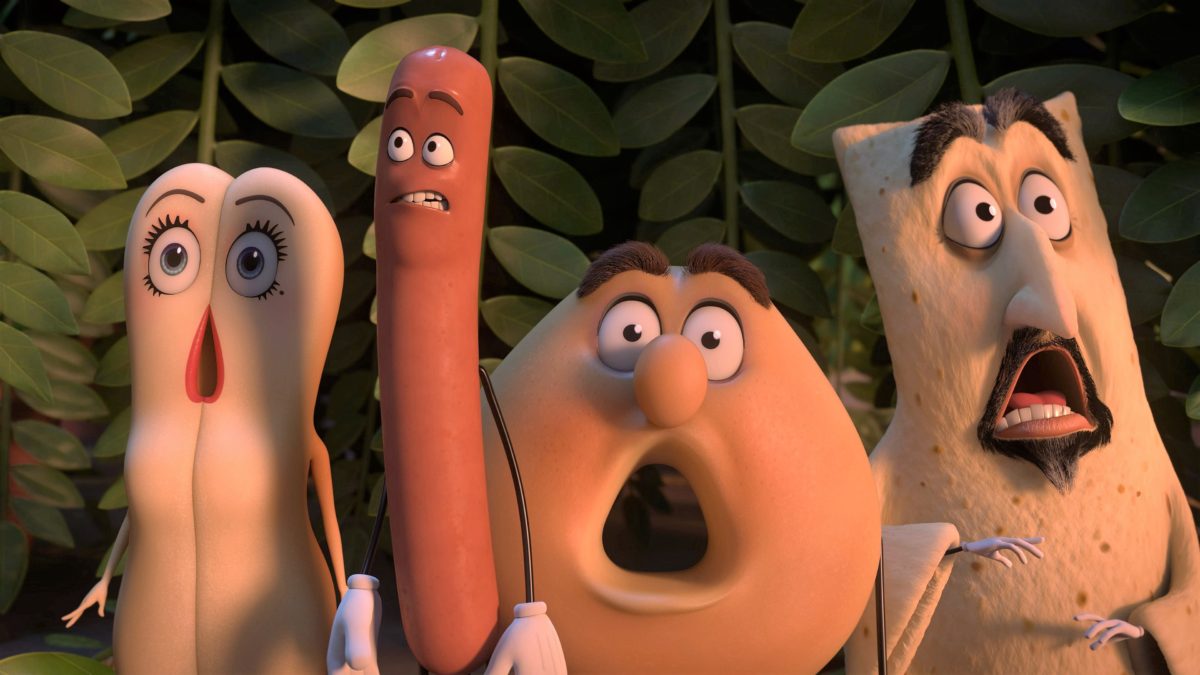 That fantasy soon wears off as you’re turkey slapped in the face with constant reminders that this movie is called Sausage Party. That’s the joke, they’re going to keep making it, and thankfully it’s got enough meat to sink your teeth into.

Once it’s established itself as an adult film with most of its relentless swearing and dirty jokes relegated to the first half hour, the film is then able to take its own colourful look at issues of morality, religious dogmatism, racism and more. Then it quickly turns the swearing and dirty jokes back up to 11 for an explosive finish that makes cinematic history.

A misplaced sausage and bun (played by Rogen and Kristen Wiig) and their flavoursome friends embark on an adventure through the aisles of a massive supermarket in this raunchy animated comedy. As the store’s annual 4th of July sale draws near, the perishable pals must return to their rightful places on the shelves before the customers come flooding in to fill their carts.

It’s clear every detail of Sausage Party has been painstakingly crafted to mimic and satirise the classic Disney/Pixar look, and the polished end product lands right up there with the recent offerings from the sunshine-and-rainbow powerhouse. An impressive musical score from Alan Menken (Aladdin, The Little Mermaid) alongside plenty of visual gags and creative character work build up the kind of beautiful world that you would come to expect from films like Cars or Toy Story.

This being a Seth Rogen film, I was expecting a whole lot of stoner humour complete with smoked sausages and baked buns (don’t worry, these jokes are sparingly made). But while there were indeed jokes about rampant drug use, they were far outshone by every fast-firing food pun from the film’s villain, a literal Douche (paying out dude-bro culture) played by Kroll.

But for all the film’s attempts to seem like a generic animated blockbuster about being “true to yourself” or “the importance of family” or some shit, the best part about Sausage Party is finally being able to see big-budget animation cutting loose and channelling all the repressed fucked-up creativity that has been stifled by decades of exclusively animated children’s movies. You’ll see things that would make South Park or Adult Swim blush. You’ll then immediately guffaw in disbelief and want to see it again. However, whether Sausage Party could stand on its own a second time without the shock value is a different story.