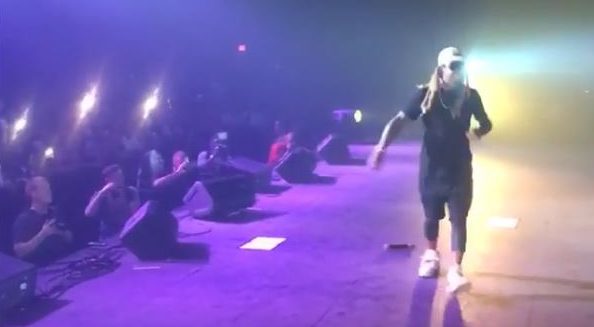 “Don’t you ever, ever, ever ask me to do this shit again”

“Don’t you ever, ever, ever ask me to do this shit again,” said the rapper as he left the stage. Instagrammer Nanlib, who was present at the gig, reckons Lil Wayne was cranky over a lack of enthusiasm from a likely exceptionally high audience.

“He was upset because the crowd was mad high dehydrated for waiting for him, and the weed fest! Lol he wanted everyone with energy and to dance to his sh*t! But no one was interested in Lollypop son, these stoners said fuck it, and continued to dab and all boo’d Lil Wayne,” wrote Nanlib (@Nanlibinvasion) in a since-removed post.

High Times told TMZ it had “no idea why Lil Wayne suddenly ended his performance after just four songs when he was contractually committed to performing for an hour for the fans”. Check TMZ’s video of the incident below.